Administration Delivers on the Infrastructure Promise

Modernizing the electric grid. Decarbonizing transportation. Investing in the future. Good job opportunities for Americans. All are moving forward with the passage of the Infrastructure Investment and Jobs Act, the largest infrastructure law in generations – and with it jobs for IBEW members in nearly every branch.

On Facebook Live, President Stephenson and U.S. Rep. Cheri Bustos, who represents President Stephenson’s hometown of Rock Island, Ill., recently discussed the bright future of the nation’s infrastructure – and the union workforce that the bill will put to work.

President Stephenson told the audience that the bill invests $149 million in the state of Illinois to build out the electric vehicle charging network. “It’s a priority of the IBEW that this work is done with national standards,” Stephenson said. “It’s essential that people installing these charging stations are properly trained.”

“When I think about the International Brotherhood of Electrical Workers, I think ‘electric,’” Bustos said.

The massive infrastructure law signed in November contains billions of dollars to increase the capacity of the electrical grid, build out the broadband network, construct a

Raising Hopes for a Long-Sought Infrastructure Project in N.H.

For two decades, New Hampshire officials have lamented the lack of a commuter rail option to draw tourists and workers to the Granite State. Without it, robust economic development efforts across the state could fall short.

But the passage of the infrastructure law has renewed hope, delivered by U.S. Transportation Secretary Pete Buttigieg.

“An easy commute from the Boston metro area would help our travel and tourism and retail – but funding has always been the issue,” said IBEW International Representative Joe Casey, who met with Buttigieg when he visited Dec. 13 to discuss the commuter rail project linking Boston to Nashua and Manchester, N.H.

Casey said it is possible that earmarked commuter rail funding in the Infrastructure Investment and Jobs Act signed by President Biden late last year could be deployed.

“Secretary Buttigieg was progressive about spending this money to bring our means of travel into the 21st century, which will improve our economy and competitiveness,” said Casey, who joined the state’s congressional delegation, local mayors and small business owners for the event.

Buttigieg also assured Casey, who was the only representative of labor at the gathering, that the project would be performed by local workers earning area standards and benefits.

“For years, the residents of Manchester and the business community have been advocating for rail,” said Manchester Mayor Joyce Craig. “Now with the Infrastructure Investment and Jobs Act it really feels like we have the momentum and opportunity to make this real and it’s so exciting.”

Seeking Input into the Law’s Rollout

Through its participation in the rule-making process, the IBEW hopes to persuade officials to adopt a standardized national training program for EV infrastructure installation, the Electric Vehicle Infrastructure Training Program.

By requiring EVITP certification, the Agencies can avoid the expected consequences of substandard electrical work, including the ramifications of improper EVSE installation, which can be catastrophic,” the IBEW wrote in comments submitted to the Transportation Department. “The risks associated with the lack of best practice standards within the industry can be mitigated by requiring these investments to be made through the deployment of a qualified workforce. EVITP certification will ensure that a qualified American workforce will perform this work, and that the jobs created are safe, good-paying, family- sustaining jobs.”

The IBEW is also participating in a working group charged with developing workforce needs in the telecommunications sector.

The group will give IBEW members the opportunity to contribute suggestions about workforce safety, wages and benefits.

Just in time for the flow of resources to fulfill the promises of the bipartisan Infrastructure Investment and Jobs Act signed on Nov. 15, the White House is amplifying how to capitalize on the historic funding opportunities.

Each project in the largest ever investment in transit, broadband rail and clean energy will come through state, local and tribal governments. This guidebook supplies government leaders with application details, key dates and explanations of available funding for particular programs.  A companion site on Build.gov is a searchable database of programs. Both will be updated to reflect changes and new information. 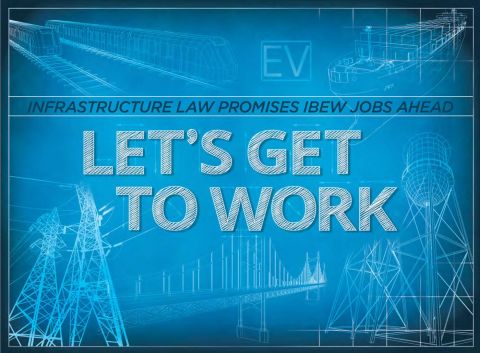