Members of the IBEW were front and center for President Joe Biden’s White House announcement of Siemens USA’s plan to invest $54 million to expand its manufacturing facilities, a growth that promises to bring at least 300 new jobs to the company’s IBEW-represented workplaces in California and Texas.

The White House event highlighted on the national stage President Biden’s close relationship with the IBEW. “President Biden a year ago was talking about bringing jobs back to the United States,” IBEW President Lonnie R. Stephenson said at the White House. “Good-paying manufacturing jobs, and more importantly, he says, union jobs. That’s why we are here.

“When my parents fled communist Vietnam with nothing but the clothes on their backs and hope of a better life, they never envisioned one day their son would be introducing the president of the United States,” said Le, a nine-year IBEW member who also serves as an interpreter for some of his Vietnamese-speaking co-workers. “My story and so many others of first-generation Americans would not be possible without the important pro-worker, pro-union policies that President Biden and his administration support.”

President Stephenson said the IBEW is proud to partner with Siemens to advance manufacturing careers in this industry. “These are union careers that won’t just rebuild our infrastructure, but our middle class as well. I’m excited by Siemens's announcement that it is investing in American manufacturing to make electrical equipment that will help strengthen our energy infrastructure while also putting us on the road to a clean energy future.”

Also on March 4, President Biden announced the most robust updates to the implementation of the Buy American Act in nearly 70 years to ensure taxpayer dollars create good-paying jobs here at home, strengthen critical supply chains, and position U.S. businesses to compete in strategic industries. Since President Biden took office, the economy added 375,000 manufacturing jobs, the most in 30 years. 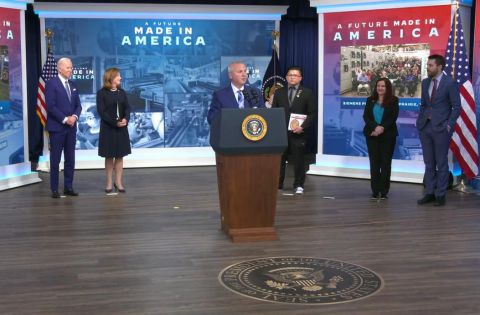