With the stroke of the pen, alongside more than 10 IBEW members and a bipartisan group of lawmakers at the White House on Nov. 15, President Biden made official one of the biggest infrastructure investments in U.S. history.

Its size and scope ensures that it will rebuild both the country’s weakened infrastructure and the middle class. Touching nearly every sector of the U.S. economy, the bill was touted on a level comparable to the construction of the transcontinental railroad in the late 19th century and the interstate highway system in the 1950s.

“I could not be more proud of IBEW members who have long called for transformative investments in infrastructure, and are now ready to get to work rebuilding this country,” said IBEW President Lonnie Stephenson. “The long-overdue upgrade America has been waiting for has finally arrived.”

Other IBEW members present at the White House ceremony included:

Washington, D.C. Local 70 member Michael Powers said they envision “big things” for the outside local in the next few years, like a sizeable membership increase and a new training center down the road.

“This bill will lead to doubling the capacity of the grid in the next 10 years,” Powers said. “We are very excited about the opportunities and happy with the Biden administration’s prospects for unions and his support.”

“This bill will lead to doubling the capacity of the grid in the next 10 years,” Powers said. “We are very excited about the opportunities and happy with the Biden administration’s prospects for unions and his support.”

Biden’s signature on the Infrastructure Investment and Jobs Act came after months of political wrangling, finally clearing the House in early November.

The law contains core investments in IBEW branches, including:

$110 billion for roads, bridges and other major projects

$66 billion for passenger and freight rail

$17 billion for ports and waterways

Passage by the House of Representatives came only hours after the IBEW launched a lobbying effort involving hundreds of IBEW members working the phones in an all-out push for a vote on the infrastructure legislation that ultimately passed both chambers with bipartisan support.

First, President Stephenson convened a call on Nov. 1 with more than 500 IBEW members to urge them to press their members of Congress to support the package.

“Congress must seize this once-in-a-lifetime opportunity,” President Stephenson told the IBEW members. “I know IBEW members are ready, willing and able to roll up our sleeves and get to work. But we cannot rebuild America on our own. We need elected leaders to understand the urgency of this moment. We need them to take action immediately.”

President Stephenson said it is past time for investment in America’s foundation.

“This is our chance for robust, transformative, job-creating investments in infrastructure,” he said. “Let’s show our elected leaders the power of IBEW strength and solidarity.”

Winning Passage of the Build Back Better Act

Relief for middle class families is one step closer with the passage by the House of Representatives of the Build Back Better Act on Nov. 19.

Like the infrastructure bill, the Build Back Better Act will make transformative investments in future generations, the health care system and public schools.

“For generations, IBEW members have joined our working sisters and brothers across the economy in calling for the kind of basic protections and services found in the Build Back Better Act,” President Stephenson said. “This historic legislation will improve quality of life for millions, and today, IBEW members are celebrating its passage by the U.S. House of Representatives.”

President Stephenson said the IBEW looks forward to working with lawmakers in the Senate to enhance the legislation by including provisions to retain jobs for existing workers in communities that depend on the energy industry for economic survival.

The Build Back Better Act, recognized by the term “budget reconciliation,” now heads to the Senate, where it is likely to evolve. If it changes, the House will have to vote on it again before it can be signed by President Biden. IBEW Government Affairs staff is monitoring its progress. 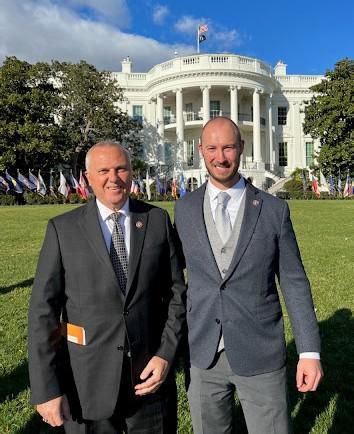